No news is good news, as the saying goes — which only goes to show that whoever coined that phrase was not waiting for UK Borders and Immigration to respond to her spousal visa application. We have not as yet received any news regarding my UK visa, and although that might only indicate that the powers that be are taking extra long minting a beautiful, special edition visa just for me, my guess is that my application (which, by the way, includes my passport, birth certificate, and all other documents essential to the verification of my identity for, among other things, the purposes of travel outside of the domestic USA) is still floundering at the bottom of a pile of more expedient applications.

Another significant possibility is that my application, including all aforementioned documents, was thrown carelessly on a container ship because I mailed it at the cheapest rate, the container ship sunk, and every single piece of paper essential to my being is now at the bottom of the ocean, gone forever — meaning that not only will I have to start my visa application all over again, but also that, in order to do so, I will first have to go through the process of obtaining every important, official document imaginable, incurring all associated costs, frustrations, and fits of despair.

It must be said that my expectations regarding the time it takes to receive a spousal visa might be sort of unreasonable. After all, it was only a little less than two months ago that I actually sent my application off to Sheffield, and visa processing time is set at about 3 months (ALTHOUGH OTHER PEOPLE ON THE INTERNET FORUMS RECEIVED THEIRS SOONER).

So, I am still in Louisiana, chez les parents, and Benn is still in Ipswich, doing stuff on the boat and watching happy couples who legally reside in the same country take advantage of the fine weather by sailing around the Orwell Estuary.

As usual, Benn has been making excellent progress with Pas de Deux. He has even got the dinghy in working order and already taken it out for a little trip — although his motivation for sorting out the dinghy did not exactly arise from an impulse towards industry and order. Instead, he was compelled by an act of bravery and heroism worthy of the greatest of sea captains! 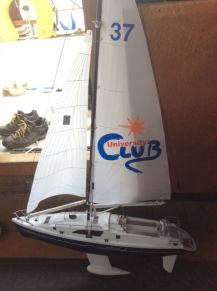 That day, he had bought a pretty RC sailboat for £2.50, but only moments after setting out to sea, the unhappy vessel drifted off and was stranded on the far shore of the cut. As it was night and the tides were uncertain, it was impossible to rescue the sad little boat without significant danger of loss of life and limb. Everything portended a tragic end for the little boat — but all was not lost!  For the very next morning, Benn found that the tides had washed the sailboat all the way to the bridge and left it sitting perky and upright on a pile of debris just almost within reach.

So, Benn speedily got the dinghy together, rowed over to a spot near where the sailboat lay, and waited for the tide to come in so he could get near enough to catch it. And yet, just as the water began to rise — horror upon horrors! — he noticed that the boat was actually stuck in the mud and would be swamped by the swelling tide! Throwing all caution aside, Benn rushed in to save it, but was tragically too late, as the electronics had already perished beneath the swirling waters and our poor little boat was no longer seaworthy. Happily, Benn is good at fixing things like electronics, so we can expect to see the jaunty craft upon the waters once again. Huzzah!

More importantly, but certainly less heroically, after suffering a shock brought on by our winter electricity bill, Benn has managed to get his hands on a few wind generators in need of repair and no less than TWELVE solar panels. We are inching closer and closer to dropping off the grid, although, in truth, it might not be entirely possible until the boat is fully insulated and ventilated and our heating system is more efficient. The oh-so-useful electric heater that caused our energy bill to spike so drastically will not run on DC power alone (and if you want to know why this is, read our post on AC/DC systems).

Benn has also made his first splice, which I think is pretty impressive!

And there’s your update. All talk and no action. Well, more like all wait and no visa. Hopefully, we will be reunited soon and something interesting will finally happen aboard S/V Pas de Deux. Until then, Benn will continue doing useful things aboard the boat and I will continue moping and taking photos of my cats.

But just look at the little guys!

And one of Fuji as a pup for good measure…

Why buy a pied à terre in a glamorous, cosmopolitan city when you can own your very own pied l’eau? This is a blog about testing the waters, swimming not sinking, venturing into terra incognita, and pretty much every other maritime cliché to be found on the seven seas.

We are a participant in the Amazon Services LLC Associates Program, an affiliate advertising program designed to provide a means for us to earn fees by linking to Amazon.com and affiliated sites.